Evolution of Concept and Its New President 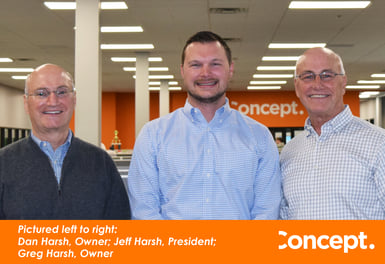 Jeff was fourteen years old when I started Concept.  He saw me setup an office in the unfinished part of our basement.  At the time I am not sure Jeff truly understood the risk and or ramifications of starting my own business.

Jeff’s first job in the company came when he was in Jr. High.  Val and I would run him up to the office in the evenings and on the weekends as he was responsible for emptying trash, cleaning toilets, sweeping floors, and cleaning the Beta fishbowl.

Starting from the Bottom

When Jeff moved into high school, he would work part-time after school.  He would come in the afternoon and work inside our CRM system performing sales pipeline updates for our customers.  That was Jeff’s first exposure to CRM and sales pipelines.  Also, during this era, Jeff worked a lot in Excel and did a lot of database cleanup, de-duping data, etc.  It was during this time that Jeff really got exposure to what Concept did as he would hear our BDMs on the phone.  He became familiar with many of our accounts as he worked on updating their sales pipelines, cleaning up their data, and hearing the BDMs on the phone positioning our client’s products and services.

Jeff has always had a strong work ethic.  He started a lawn mowing and snow shoveling business when he was in Jr. High and had several neighborhood customers.  He worked his lawn mowing and snow shoveling business all the way through high school.  When he went off to college, he passed the business down to his younger brother who held the business while he was in middle school, high school, and even into college.

While in high school and college, Jeff had several part-time positions.  Jeff worked at several retail stores including True Value Hardware, Dick’s Sporting Goods and Reebok Retail Outlet.  Jeff also worked at Red Robin and most of his college days at Longhorn restaurant where he was a server.

When Jeff graduated from high school, he knew he wanted to pursue a career in sales.  Jeff graduated from The University of Akron where he earned his Bachelor of Science, Business Administration/Marketing degree.  Before joining Concept after college, Jeff wanted to gain some experience outside the family business.  Immediately after graduation, Jeff went to work as a Technical Recruiter for a national staffing company where he got his first exposure to cold-calling and customer relationship management (CRM).

In 2010 Jeff joined Concept.  At that time, he had an interest in the family business and hoped that someday perhaps he would get the opportunity to manage it.  Jeff started his tenure with Concept as a business development manager (BDM) and worked that role for one year.  As a BDM, Jeff was assigned primarily to the Lift Truck/Materials Handling industry and the Marketing industry.  He had a few accounts in each of those industries in which he was responsible for generating leads.  It was important for Jeff to start as a BDM because the BDM role was and still is the foundation of Concept.

In 2011, Jeff moved to a Performance Manager where he was responsible for working with and helping other BDMs be more effective in their role.  In 2012, Jeff became an Account Manager where he worked with our customers and helped them set strategic directions for their lead generation efforts.  As an Account Manager Jeff got exposure to multiple industries, a variety of different sales structures, many CRM platforms and the various struggles companies incur when trying to grow sales.

In 2014 Jeff was part of an internal team responsible for migrating Concept to Salesforce.com.  This was a big undertaking as we were moving from an existing web-based CRM platform to Salesforce.com.  Shortly after our migration to Salesforce.com, Jeff launched our CRM division and our Salesforce partnership.  Launching our CRM group enabled us to offer additional services to our customers and to become a more rounded, value added partner.  Jeff currently holds three Salesforce certifications.

Time of Growth and Expansion

In 2016, Jeff became V.P. of Operations where he managed our entire production staff and Account Managers.  During this time, Jeff got his first exposure to managing a large group within our organization as he managed fifty plus employees.  During this period, Jeff designed many of our KPIs and the systems to manage them, which many are still being used today.

In 2018 Jeff moved to the sales side of Concept and became our V.P. Sales & Marketing.  It was at this time that we wanted to bring in more automation to our internal sales efforts.  Secondly, we wanted to expand the types of lead generation services we could offer to our clients.

In this role, Jeff initiated Concept’s movement into the digital services space and built an internal marketing group which now enables Concept to offer a full suite of lead generation services to our clients including outbound cold calling, inbound lead management and qualification, Google advertising, search engine optimization, email marketing, sales cadence management, and website development services.  While moving down this path, Jeff has achieved multiple Google and HubSpot certifications along the way.  Under Jeff’s direction, Concept, within the first year of offering digital marketing services, has recently become a certified HubSpot and Google Partner.

Jeff has held most every position within our organization and been exposed to every area of Concept.  We have specific goals and strategy set for 2020 centered around sales and marketing, incorporating new technologies, and new service offerings for our customers.  Jeff has been a key driver behind each of these areas.  We feel strongly that now is the time to move Jeff into the President role.  We believe his innovation, work ethic, and ability to build effective teams around him will prove to be beneficial as we move forward.

We are a seventeen-year-old company that has been gearing up to move to the next level, and we are confident Jeff has the skill set, knowledge, and vision to move us there.

Do you need help with sales development that generates success?

Do You Need More Leads or More Sales? A Tale of a Sales Lead - Part 1